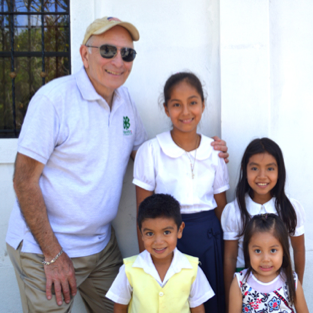 Carl Marinacci spent a 35-year career working in human resources at AMOCO corporation, retiring in 1999. He served in a variety of positions, including Vice President, Compensation & Benefits and Vice President of Human Resources for AMOCO’s refining and marketing company.

Carl and son, Kevin Marinacci founded Fabretto Children’s Foundation in 1993. The purpose of which was to raise money for children in Nicaragua.  Carl has served as a member of the Fabretto’s Children Foundation Board of Directors since its inception in 1993, and as Chair from 1999 – 2010; he is now the Chairman Emeritus.

Carl is a graduate of Johns Hopkins University and the University of Chicago. He has served on the board of the Midtown Education Foundation in Chicago and on the Evanston Human Relations Commission. He is father to five children and grandfather to five grandchildren. Carl resides in Evanston, Illinois with his wife, Barbara Phelan. Barbara is a proud sponsor of two children in Fabretto programs.  In the Summer, Carl and Barbara spend several months of the year in Italy at his home in the village from which his father emigrated.